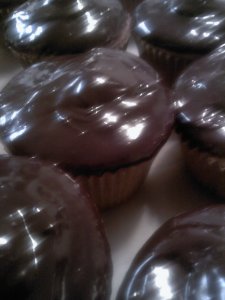 “Mom,” my daughter said. “I have to bake cupcakes for Huffman’s class. It’s for a bake-off and I get 25 points for entering.”

“Great,” I answered. “How many points do we get when we win?”

Oh, we won. We don’t mess around. We made Hot Fudge Sundae Cupcakes (a la Joy the Baker) with a cookie dough center, complete with whipped cream and cherries. Some of the other kids—kids who brought inferior baked goods–criticized Maddy for trying too hard.

Trying too hard?? It’s a competition! Do you criticize your basketball team for trying too hard? Do you tell your track runners to slow down? No. You tell them to WIN.

My daughter and I are both highly competitive. Our competitiveness is exceeded only by our lack of athletic ability. So while we can’t run faster or jump higher or hit harder than you, we will KICK YOUR ASS in a bake-off. Our cupcakes will mop the floor with your lousy cookies and then stuff them down your throat, LOSER.

Only we won’t say that out loud, because we’re ladylike.

Maddy and I were cracking ourselves up, talking about our aggressive baking and how our thwarted competitive natures spill over into non-competitive arenas because we have no other outlets. Maddy said something like, “Yeah, I’m good at all the lame stuff—baking, board games, logic puzzles…”

Then, because I am a mom, I jumped in with a little lesson that I wish I’d learned earlier in my life.

When I was younger, I felt like I was only good at easy things. My strong suits are words, pictures and people.  To me, those are all easy, fun, fluffy talents. Even my strongest skill, which has always been writing, seemed inadequate to me. Because I have a simple, straightforward style, I felt like my writing was unsophisticated and childish. I always believed that the real value was in the numbers skills–the logical, left-brain sort of talents. Yeah, I can make things look nice and I can get along with people but who cares? Who’s going to pay me for that?

As I entered corporate America, I was subjected to personality and aptitude tests that reinforced that belief. No matter which test they administered, I was cast straight into the bimbo category: you’re a Sanguine! A High I! An ENFP! They all seemed to indicate that I talk too much and I can’t keep my act together. I think my elementary school teachers were in on those tests.

I wished I could be more like the analytical types, or the bold, Type-A types. I wished my skill sets were more practical. Basically, I just wanted to be what I wasn’t. Don’t we all?

One perk of getting older is that as we gain perspective through experience, we are able to see ourselves more clearly and understand how we fit into the big picture. I have now read enough bad writing to realize what a gift it is to be succinct and articulate. I have now worked for enough terrible bosses that I see the value in people skills. I have seen enough ugliness to appreciate my own ability to make things beautiful.

I’ve also figured out that not everyone thinks that what I do is easy. Even smart people with great ideas can’t always put them in writing. They think it’s some crazy superpower, just the way I feel about people who can do math in their heads.  More than one employer has capitalized on my people skills—turns out that people skills, or “soft skills,” as they are referred to in corporate-speak, are very hard to teach.

I’m not sure if this is universal or just women who do this, but it took me a long time to understand that the “easy stuff” only seemed easy to me because I am good at it.

This phenomenon of downgrading our own talents seems to be an extension of the grass-is-always-greener mindset.  We always think someone else’s talents are more valuable than our own.  Someone said, “If the grass seems greener on the other side of the fence, try watering your own lawn.”  Genius.

In this case, we need to recognize that just because it comes naturally to us, doesn’t mean it’s cheap or lame—someone wishes it came naturally to her, too.  Someone wishes he could write a better sentence, or bake a better cupcake.  My abilities are unique and valuable, even though it took me several decades to realize it. They are worth cultivating.

Another perk of being middle aged: I still have time to implement all this wisdom I’m trying to impart to my daughter. It’s not like I’m croaking out advice on my deathbed. It’s not too late to capitalize on those talents—not too late to water my own lawn.

8 thoughts on “Cupcakes and Competition: Lessons from a High School Bake-off”