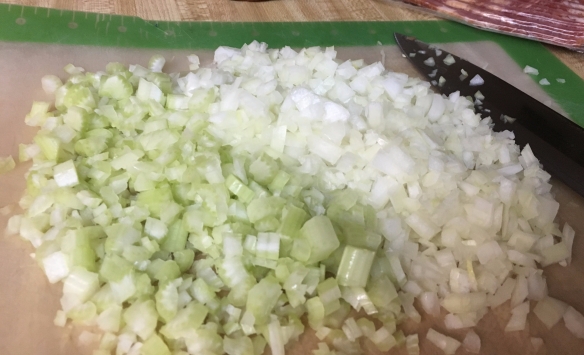 It’s 6 am on a vacation day and I’m in the kitchen, chopping onions. The house is silent; even the dogs are still asleep. Like I do every time I chop an onion, I’m thinking about my sister, who taught me proper onion-chopping technique. I chopped at least twenty years’ worth of onions before I learned this efficient method, freeloaded from my sister’s pricey culinary education. Come to think of it, I’m chopping with a knife that she gave me, too.

I’m pretty excited to make this corn chowder. It’s my go-to recipe when I need to bring a meal to someone, and it’s perfect for a January dinner at a beach house with girlfriends, which is where I’ll be headed as soon as the chowder is made. And after I bake the cookies, of course. It’s a five hour drive up the coast. Who goes on a road trip without oatmeal raisin cookies? Not me.

The smell of onions and celery sautéing in bacon fat makes me think of football and I realize that if I were cooking them in butter, I’d be thinking of Thanksgiving…but the bacon grease could be any old winter weekend from my childhood: the rich, cheery smells of some long-simmering meal combined with muffled cheering from televised crowds. I take a minute to appreciate the source of these sensory memories: I had a mother who cooked. I had a father who provided. I had a comfortable, stable childhood that left me with happy memories of home.

I also have this recipe binder, which is like my personal memoir in food, each recipe recalling the person who gave it to me or the time I first made it. 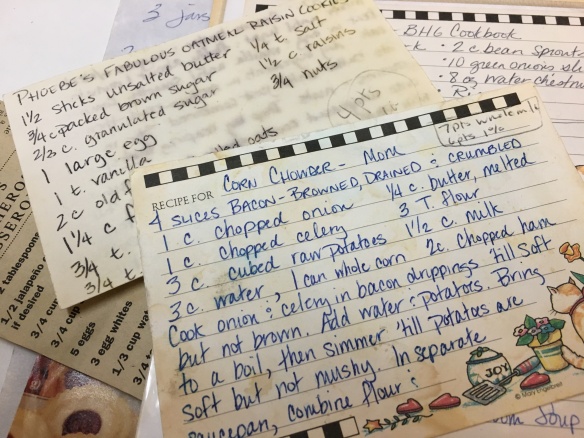 It’s my mother’s corn chowder recipe that I’m using now. The card is written in my handwriting but I can tell that I copied it verbatim from hers, because I can hear her cautionary tone in the instructions: “Sauté til vegetables are soft but not brown…Boil til the potatoes are soft but not mushy.” I know this recipe by heart, but I always pull the card out anyway, to read those words and imagine her saying them.

Our house burned down in 1989, when I was a teenager. Everyone talks about the photos you lose in a fire, but no one ever talks about recipes. My mom is a recipe follower, and she lost some fantastic recipes in that fire, including her lasagna recipe and the only chicken and dumplings recipe that worked for her. I don’t believe she ever made chicken and dumplings again after the fire. The corn chowder recipe burned, too, but she was able to write it from memory, thank goodness.  It’s one of the most well-worn recipes in my binder.

While the potatoes simmer I thumb through the binder for Phoebe’s Fabulous Oatmeal Raisin Cookies, a recipe my sister copied for me from the Friends Cookbook.  I don’t have the original card in her handwriting anymore, but I can still picture it, with her notes: “Unsalted butter–I use salted then omit the salt” and “One Large Egg–You be the judge.”

I flip past my other sister’s recipe for Finnish Ribbon Cookies. Mine never turn out as pretty as hers, but I like to make them anyway because they are my brother’s favorite. Then there’s my favorite, Molasses Crackles, in the handwriting of an old friend who has since moved across the country. And here is the deadly Chocolate Peanut Butter Bars recipe from Mrs. Schroeder, a neighbor whose kids I babysat in the 80s when I was still a kid myself. I remember sitting on the rust-colored sofa in her safari-themed living room, painfully aware of the chocolate peanut butter bars in the fridge and struggling to keep myself from eating every last one of them before she got home. I really need to add those to the Christmas cookie roster.

Here’s my first peanut butter cookie recipe, which isn’t the greatest but I keep it because it has a little note from my ex-husband scrawled on it, in which he calls me the ridiculous pet name he used before we fell apart. Despite everything that’s happened since, or maybe because of everything that’s happened since, I still find it sweet to see that note. It doesn’t make me sad, though. I have a much better peanut butter cookie recipe now.

Here’s a recipe for Jamaican Chicken Stew that I once made for a dinner date whose name I can’t even recall. I don’t think I saw the guy again after that night, but I know the stew wasn’t the problem. That stew was top notch.

Here are the vegetable enchiladas with tomatillo salsa that I made for a friend who was going through a vegetarian phase at the time. I spent an entire day preparing that meal, but when I look at the recipe now I can’t imagine why it took me more than an hour.  Then I realize that was at least twenty years ago, when I was first learning to cook.

Here’s a cheesecake recipe from my Aunt Carol, written in my sister’s handwriting. Auntie Carol is like a smaller, sassier version of my mother.  She cooks for everyone, anyone, all the time. How long has it been since I’ve seen her? Eight years? Ten?

Here are the recipes from Melissa’s cookie exchange, the last time I saw her extraordinary mother before she died. Melissa’s mom made Chocolate Covered Cherry Cookies, now a staple on the Christmas cookie roster and my daughter’s all-time favorite cookie.

Now I’m whisking the roux into the boiling potatoes and wondering if I’ve taught my daughter how to make a roux yet. She’ll need to know that.

I can’t wait to share the chowder and the cookies with my friends. We’re each covering a meal this weekend and that’s one of the things I most look forward to. What a joy it is to cook for people you love, and share recipes, and taste the story of someone else’s life when they share their recipes with you.

Alone in my tiny kitchen, with a bubbling pot on the stove and a counter full of butter and sugar, I find my eyes spilling over with gratitude: for my mom, aunts, and sisters; my children and my friends; a family that loves to cook; a legacy of warmth and flavor and generosity. I’m surrounded by memories of loved ones at my table and of meals prepared for me by others. I’m realizing that kitchens are sacred, and that food is sacred indeed, and that this might be the first time in my life that I’ve truly understood the meaning of that word.

10 thoughts on “Heat Through & Serve: A Corn Chowder Meditation”