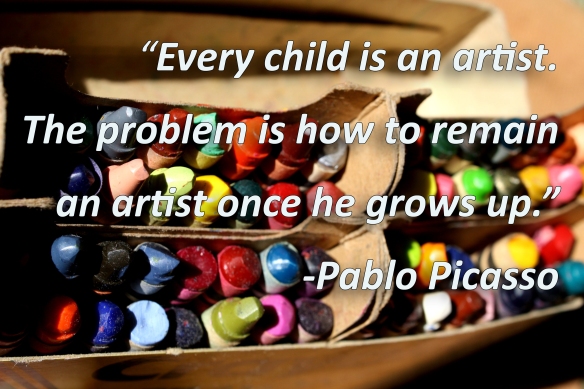 This is how I remember our house in 1977: green shag carpet, a brick fireplace in the center of the family room wall and padded bench seats built in on either side. I kept my paper and crayons inside one of those benches. I had a little table in front of the bench, and that corner of the room was my artist shop. (I was only five, so I didn’t know that artists have studios.) My mom would place orders for pictures and I would draw them for her.

Once, instead of a piece of paper, she let me draw on a long envelope. Because of the shape of my “canvas,” I drew a parade. I have a fragment of memory of that drawing, pencil horses attached to a circus wagon. In my memory they look just like high-stepping white horses with pretty arched necks. But I know if I were to get my hands on that drawing today, they would probably look more like kidney beans with legs.

I was going to be an artist when I grew up.

Like every kid, I changed my mind about this pretty often. I went through phases: a veterinarian, an actress, a truck driver, a writer. (The truck driver phase was inspired by “BJ & The Bear,” a television show about a truck driver who had a chimpanzee. When I understood that the chimp wasn’t standard issue, I let that one go.) But my earliest aspiration was to be an artist.

Fast forward 37 years and here I am, doing marketing for a specialty contracting firm. It’s not awful, but it’s a far cry from art. Over the last couple decades as a working mother, there’s been little time for creative pursuits. There have been scrapbooking sessions with my girlfriends and the occasional art class or workshop—those have been some of the brightest stops in the march of my days. But the truth is that art—the regular practice of it—has been missing, and I feel the lack in an anxious, pent-up way, like a dog that’s been kenneled too long.

My easel is collecting dust in a corner. My paints are dried up in a drawer in the garage.

This is not acceptable.

Instead, I’ve chosen to write about things that I plan to find again, losses I can take back. Art is an easy one.

I began this blog as a way to examine some of the questions of midlife, and here’s a good one: now that my kids are grown and my time belongs to me again, what am I going to do with it?

I’m going to make art, damnit. I’m going to set up a little corner artist shop like I had when I was five, with art supplies at the ready, and I’m going to default to my easel or my journal instead of my television at night. I’m going to draw and paint and collage and whatever else I can get my hands on.

I believe that the beauty of art is as much in the practice and meditation of creating it as it is in the finished product—in my case, probably more so. I think it’s important to flex your creative muscle whether you produce something “good” or not. So I’ll post about my process and how I’m taking back my inner artist. I’ll even show you my crappy circus ponies or whatever else I churn out.

I would love to hear from any of you who have managed to maintain a regular artistic practice. How do you incorporate art into your daily life?

The air in Baja may be thicker than the air here in Orange County. I remember it heavy and soft like a blanket. When we deplaned onto the blazing tarmac, it hit me smack in the face, smothering, like my older brother had jumped out of nowhere and thrown it over my head. But that night by the pool, the blanket was cuddly and lightweight and welcome, sweet to the touch.

Of course, I was pretty drunk.

I could only feel the air on a portion of my face, the rest of me being submerged. When I relaxed completely, only my nose and lips broke the surface. Back arched, I floated dreamily as the glowing, balmy water lapped around me, filling my ears with those rushing, underwater sounds. The pool was empty; at two in the morning, most of the resort guests were still in the disco or paired off and cavorting somewhere.

I will never forget the view, straight up from the center of the pool, in the wee hours of a Mexican morning on that resort in Loreto. An enormous full-moon overhead, palm trees soaring on either side, their fronds fringing the edges of my vision, and something—I thought it was a bat, and I like bats—something swooping over the surface of the water.

The bat—it could have been a bird, though I know not many birds fly at night—was diving at the water. My impaired reasoning told me it was hunting, snatching up the bugs that floated on the surface.

There weren’t a lot of bugs. This would not be a pleasant recollection had the water been bug-ridden. As I recall it, however, with the good-natured bat hunting for appropriately distant bugs, this is one of the most relaxing memories I own.

Do bats eat bugs? I don’t know that either. It wasn’t important at the time.

I was twenty-seven, and it was my first time on a resort. My employer had taken the whole company on an incentive trip. As I have been most of my life, I was a broke, single mom and I left for an all-expenses-paid trip to Mexico with fourteen dollars in my wallet and zero dollars in reserve, trusting that they really meant it when they said ALL expenses.

I wasn’t disappointed. Having grown up as one of six children, I was not accustomed to travel or resort vacations, or vacations at all, really. While I understood the concept of all-inclusive resorts, the pleasure of it didn’t really sink it until I got there. Yes, there really are unlimited free tacos and unlimited Coronas, even first thing in the morning, and you can pick any restaurant on the resort and yes, it’s actually free. Wake up in the morning, decide if you feel like swimming or kayaking or watching a show or doing a dorky activity and no, there’s no charge for that. Do whatever you feel like doing and it’s all free. I was in single-mom heaven.

At night we went to the disco on the resort, a place with air conditioning so violent it would have frozen me solid if I didn’t rush to the dance floor. Earlier that day we’d learned how hard it is to catch a buzz in Mexico, the common theory being that in 110-degree weather, you sweated it out before it hit your system. (Science!) I subsequently learned that gin will get the job done in any weather. Since dancing, in my case, requires a fairly significant level of intoxication, I ordered the resort’s featured special, the Singapore Sling, and proceeded to get my groove on.

The disco throbbed with bass-heavy dance music and sweaty tourists. I contributed my own gin-fueled moves to the melee, shaking it with friends, co-workers and strangers in a big, rhythmic huddle that even that ferocious air conditioning couldn’t penetrate.

Several Samurai Slings later, dripping with sweat, holding my heels in my hand, I padded out of the disco barefoot and swooshed back to my room. (When I am drunk, I have a heightened awareness of my feet propelling me forward, and I feel my deliberate, hurried walking like a swoosh.) It must have been 85 degrees in the dead of night, and though 85 was a delicious break from the scorching day, my disco-fever demanded a remedy. Only a night swim would cure me.

In my hotel room, I peeled off my sweaty clothes and tugged on my still damp bathing suit. I watched my feet propel me, swoosh, down to the pool deck.

It didn’t occur to me that swimming alone while schnockered was not very wise. The water felt substantial, dense like jello. I floated without trying. My hair spread out around my head like a mermaid’s, and my limbs were weightless.

I don’t know how long I floated. Five minutes? An hour? To this day, however, I clearly recall the thought that finally motivated me to clamber out of the pool. I became concerned, as I floated there with only my nose poking out of the water—I feared the bat might mistake my nose for a bug. They don’t see well, you know. I like bats but I didn’t want it to eat my nose.

There were several all-expense paid trips to Mexico from that employer, whose M.O. was to grind employees to an exhausted, stressed-out pulp, until we were all ready to quit, then revive us with margaritas and poolside limbo contests. Each year we swore we wouldn’t fall for it again. I fell for it for four years.

But to this day, when I am broke and stressed and longing for escape, I flash back to that tipsy swim in Loreto, alone with the bat and the moonlight.